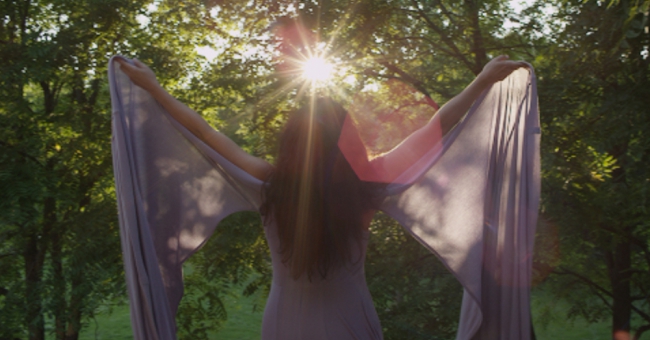 As part of The Talking Stick Festival, I attended the film screening of Reel Reservations: Cinematic Indigenous Sovereignty Series, which is a series of short and feature Indigenous films curated by Colin Van Loon. On Thursday, February 25, I attended the film screening of The Embargo Project, a collection of short films by Indigenous women filmmakers. For this blog, I will discuss one of the films titled Skyworld by Zoe Hopkins.

Zoe is Heiltsuk and Mohawk from Six Nations, Ontario. She is a fluent speaker of the Mohawk language and maintains close connections with both her Heiltsuk and Mohawk roots. She received a degree in Film from Ryerson and furthered her studies at the Sundance Institute Feature Film Program. Zoe has screened films around the world at festivals including Sundance, Worldwide Short Film Festival and Berlin. She has won several awards, including the NSI Online Festival Festival’s A&E Short Filmmakers Award and the Best Canadian Short Drama at the imagineNATIVE Film + Media Arts Festival.

Zoe said, “To sum up the rules I was given by the group: I’m scared. Until I remember the point of the whole collective – to experiment without fear of failure.”

The film is an 18 minute surrealist drama about a mother’s journey after the passing of her son’s father. At the beginning, the narrator briefly describes skyworld. In Mohawk teachings, people come from skyworld and return after their passing. She said that when her husband’s passing, part of her went to skyworld as well. As part of her grieving process, the main character moves between the real world and skyworld. She moves in with her parents to help take care of herself and her son and her parents begin teaching the Mohawk language. Through her connection with family and learning the language, she is able to find healing. At the end, a year after the death of her husband, she no longer moves between the two-worlds as she embraces her son.

There are a lot of things that could be talked about from this film but one thing that stood out to me was the role of language. The main character is on a personal journey of grieving and healing but I think it can also be viewed as a metaphor for the colonial damage on Indigenous people and the work that is being done to repair and resist this damage. Zoe’s film can be looked at in Nolan’s terms of ceremony and healing. One of the ways language is used in this film and for Indigenous people is as a tool of healing. By understanding the world around us and our lived realities through our Indigenous language, we create a worldview that allows us to escape from cognitive imperialism. One thing that the main character in the film pointed out is that there is no word for “empty” in her language but rather everything stems from the positive, so it would be “not good” rather than “bad.” Language is a way to return and reclaim Indigenous ways of knowing and being.

Language can also be used as a tool to decolonize the presentation space. Too often, film, theatres, the stage and other performance places are colonial spaces that impose one way of knowing onto the experiences of the audience. This little room for Indigenous experiences to be validated, upheld, and discussed. The use of language immediately challenges and deconstructs that space to make it relevant to the Indigenous performers.