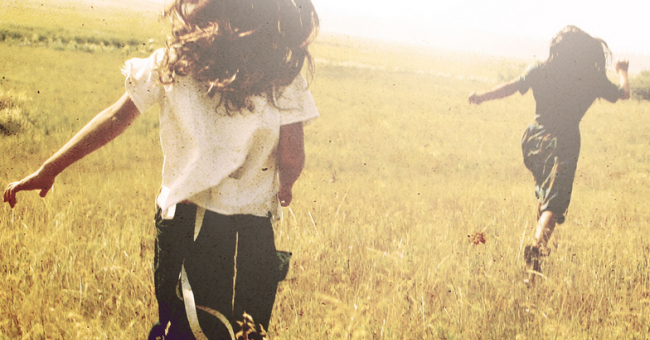 Set in the 1970s, the film starts out with two children happily playing in fields. The older girl is wearing a dress and braids in her hair. The younger boy is wearing pants and a shirt. The opening scenes are bright, fast and colourful.

There is hardly any dialogue in the film and when there is, it is mostly in a First Nation language with English subtitles. One of the first lines said is that the girl has to go to school. One of the next scenes shows the two children playing in the forest. The little boy is playfully looking for the little girl as if they are playing hide-and-seek. He eventually finds her at a view-point crying. When he walks up to her, she ignores him and walks away.

The boy then goes to his mother and tells her how this girl is ignoring him. The mother says, “Your sister loves you”. The girl continues to ignore the little boy. There is a scene of the a father, mother and the little boy all waiting in a row on the road while a truck pulls up and the girl jumps out in a school uniform. The little boy talks to his sister in their language and she responds in English. He tells her something along the lines of  “speak normally”, and she responds in English saying that she is.

My first impression of Clouds of Autumn was just how beautiful the scenery and the filming was. Every image looked as if it should be framed on wall. I also enjoyed that there was not a lot of dialogue. It left room for interpretation and forced the audience to actively engage and critically watch the piece in order to understand.

I found it interesting that this story was being told from the perspective of the little boy. I feel that most stories that are told about residential schools are usually from the point of view of the person who attended the school. It was interesting to see the “poison” (Nolan, 2015) being exposed of residential schools, but from the perspective of family members who had their child forced away from them and the violence that it caused them. It is a reminder how the “weight of colonialism” (Recollect) has ripple effects on families and communities. A scene that captures this for me is the little boy watching his mother crying in the road.

When doing research on the film, I discovered that when asked about his inspiration for this the film, Mack states:

“My inspiration for the story of Clouds of Autumn came from my mother and her seven siblings being taken to residential school from the 1960s to 1970s. Growing up, I had first-hand experience of how brothers and sisters who attended and didn’t attend interacted with each other. I lost an uncle after he was deeply scarred from his experience at a residential school. And I have witnessed different forms of lateral violence. So I wanted to explore where this pain and trauma started, and focus on how those relationships began.” http://reelwest.com/Clouds_of_Autumn

2 thoughts on “Clouds of Autumn”