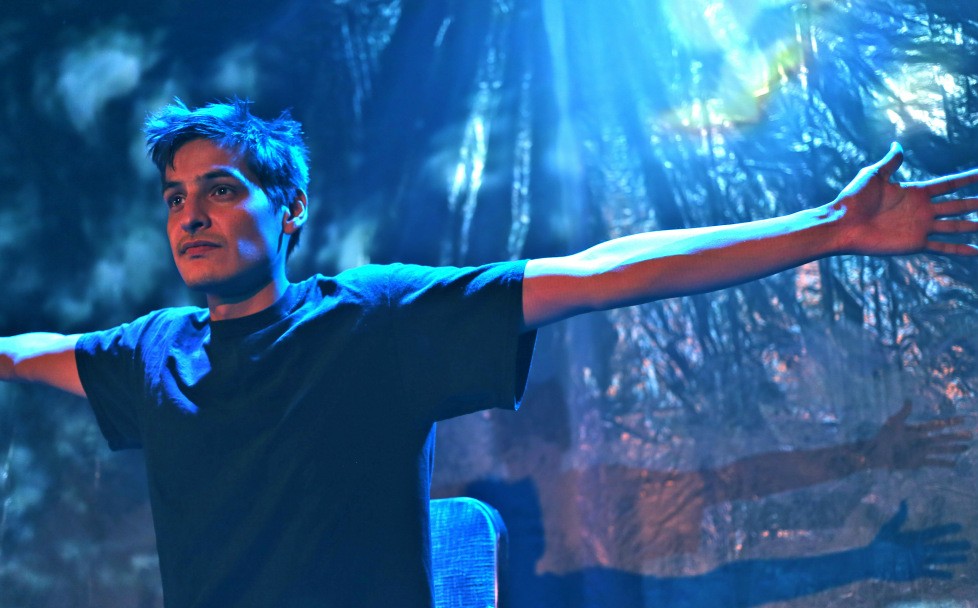 Before reading my post, I recommend reading Eliana’s beautiful and wellwritten post on the Huff here. We did our presentation together, so I will write about the aspects of the play she didn’t cover.

On February 6th I attended Huff at the Firehall Theatre as part of the Push Festival.

As was mentioned by the others who attended this play, it was in many ways difficult to watch. This was made more difficult for me, having grown up on a reserve, and been affected (in one way or another) by much of the “poison” that was exposed by the play.

Yet, despite being a very dark and difficult play, Huff has had very good reviews.

“Huff is vital theatre. It’s messy and wrenching, daring the audience to go to almost unbearable places. It begs us to see what we’d rather turn away from, making us laugh one moment and sucker punching us in the gut the next.”-Sasha Singer-Wilson

“It is unpredictable, mischievous and energetic. Huff finds joyful moments in a reality that has too often been ignored or silenced.” -Lindsay Lachance

Yvette Nolan discusses the importance of reviews as being either an opportunity or an obstruction to entering into a dialogue with the audience. Negative reviews negate the progress and objectives of Indigenous theatre.

“A theatre practitioner I know in Toronto once referred to “the dark cloud of Native theatre” as a reason for why audiences stayed away. Why would a person pay to go into a theatre and be made to feel guilty?” (Nolan Pg. 208)

“Yet the success of Where the Blood Mixes, FareWel and Dry Lips Oughta Move to Kapuskasing suggest that mainstream audiences were willing to look at the poison exposed if it were framed a certain way (Nolan Pg. 221).

Nolan suggest that this is due to the ability of producer and production team to “mediate between the audience and actor.” Judging by the reviews and attention this Huff is getting I would say that it is mainstream.

Nolan suggest that this is due to the ability of producer and production team to “mediate between the audience and actor.” Judging by the reviews and attention this Huff is getting I would say that it is mainstream.

The Artistic producer was Donna Spencer, the Artistic Producer of the Firehall Arts Centre. Yet, it didn’t feel like any mediation was happening. Other than giving the background story of Wind’s mom and dad’s meeting and descent into alcoholism and abuse, Cardinal doesn’t situate the audience within the colonial context, it is almost presumed that we know the situation, or too bad for us.

It was very clear that the audience would understand the play differently, or have a different experience depending on their background. For example, as I mentioned above, I grew up on a reserve and so I was very familiar with many of the inside jokes.

but I also understood the darker elements of the play that would have seemed alien to the mainly white upper middle-class members of the audience ( huffing gas, solvent abuse, playing the “blacking out” game). In fact, during a scene where the boy’s stepmom gives them a bottle of Lysol to make them go to bed, an older woman in front of me turned to her husband and said “what do they use Lysol for?” Yet, for me, I thought it was common knowledge that Lysol is used as non-beverage alcohol by those who cannot afford (or access) beverage alcohol.

The audience is pulled into this world in a really visceral way.  The play started with the loud sound of tearing ductape with complete darkness except for vacancy sign, which changes to “No Vacancy.” Later in the play Cardinal splashed canned tomatoes onto the audience (representing the shame these boys carry). The smell of the tomatoes was really overwhelming, even though we were four rows back.

“Mainstream audiences are only ready to examine poison exposed from a distance, looking in the window to First Nations communities where we act out our damage on eachother, and especially on our women.” Nolan pg. 234

Yet, the audience definitely is not a safe distance from this play: and is implicated in many ways. The play opened with Wind trying to commit suicide with a plastic bag on his head, he asks an audience member to take it off, who in this case does so. He asks them to not give it back, no matter what. In the end of the play he tries to commit suicide again, and asks for the bag back, but the audience member refuses. He also refers to the audience as his “imaginary friends,” It felt like this represented our inability or lack of desire to intervene.

I think the success of this play is largely due to Cardinal’s ability to depict a really difficult yet important story in both an unsettling yet humorous way.